The Journey of Obsidian Vol.2 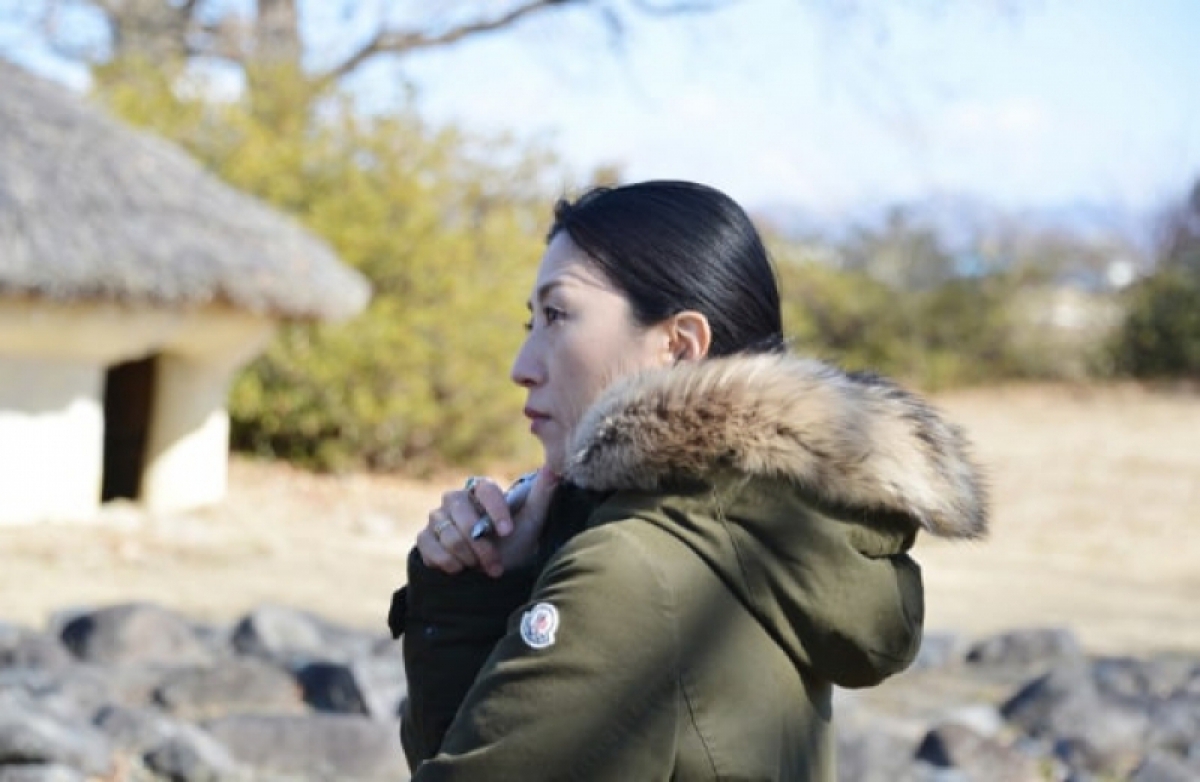 The Jomon people of the Kinsei site, enchanted by Mt. Kaikomagatake

A mysterious clay figurine was found at the Kinsei site in Hokuto, Yamanashi. It is large and hollow, with the mouth protruding like an octopus, and very large, slightly scary eyes. The experts say it is an unusual type known as a goggle-eyed clay figurine (shakoki dogū), but I don’t think so.

This somewhat strange figurine was created by the people of the Kinsei site. The site flourished during the later part and the very end of the Jomon period, which extends from about 14,000 to 300 BC. People who know something about Jomon culture might question this, but a recent study states that it is hard to find sites from the later Jomon period because by that time changes in the natural environment had changed the people’s living conditions. There are many known Jomon village sites in the Central Highlands where the Kinsei site is located, but they are generally from the middle Jomon period. This site flourished much later.

In the view from the Kinsei site, Mt. Kaikomagatake looms irresistibly. And that’s not all. Also in view are Mt. Fuji to the south, and Mt. Yatsugatake to the north. It is a truly amazing row of mountains. Standing at the site, it is easy to understand why they chose this place for the village.

According to the museum curator in Hokuto, Mr. Takashi Sano, the Kinsei village was mainly a place for ritual practice. The houses there were unusual, some with floors of cut paving stones, and others surrounded by stones in particular arrangements. At one place where the stones appear to form a coffin, pieces of charred human bone were found, along with earrings and other personal ornaments.
Hearing about all this made me think the people of Kinsei were extremely fond of stones.

Numerous dwellings that include stone building elements and date from the close of the middle Jomon period have been found in Yamanashi, Nagano and Kanagawa prefectures. I think that behind the trend toward generous use of stone in Jomon dwellings, there was a major shift in consciousness. There was a change in how they thought about stone. I would guess, for example, that a sense of “universality” began to enter their minds.

Aside from the houses, stone was used at Kinsei in other places and for various things. There are so-called stone arrays, where the stones were purposefully placed. Among the excavated relics are stone rods, both small and large, which are clearly phallic. There are also round stones. These people definitely loved stones. But they didn’t settle for just any stones. They selected white stones from along the Kamanashi River which is about five kilometers to the west, and carried them to the village.

It does seem to be more than just a case of people liking stones.

The use of stones could have had a special meaning. Perhaps there was some ritual significance to the act of working together to move heavy stones. It may even have been the people from nearby communities who carried the stones to the Kinsei site. They might have brought them and placed them there as a way of showing regional solidarity. It is quite possible that Kinsei was not only a place where some people lived, but also a ritual site for people from the surrounding area.

Our modern logic doesn’t apply to what Jomon people did. We might make rational judgments that stone is too heavy or troublesome to handle, but that kind of thinking doesn’t apply. Realistically it may hold true for aspects of daily life, but when I stand at the site and look at the spaces they created and the excavated objects, I have the feeling that modern-day logic won’t work here. For me as a modern person, that feeling rocks my world. That’s one of the things I like about visiting the site.

Mr. Sano, the curator, told me something interesting:

“By the late Jomon period, there was a change in the people’s awareness of the land, which is to say the places they lived. It may be that they made monuments in order to leave traces of their ancestral lineage on the land.”

That surprised me, because I had thought Jomon people had no concept of land ownership. Strictly speaking, the modern idea of “ownership” is probably different. Still, while plant foods were abundant during the middle Jomon period, the food supply later became unstable due to environmental change. In that situation, an awareness that “this land is ours” could have awakened, and the people may have begun to believe strongly that plant foods near their village belonged to them. If that sort of awareness grew even stronger, perhaps the whole area including other nearby settlements came to share a belief that by conducting rituals they could cooperate to keep living on the land, and that was how they managed to survive. I believe that is what happened.

Incidentally, if the people of Kinsei liked stones so much, how might they have felt about obsidian?
According to Mr. Sano, an obsidian mine could be reached by walking three to four days from Kinsei.In fact some obsidian ore has been found at Kinsei.

“Jomon people seem to have known the route to the mine very well. Remains have been found at spots corresponding to each full day’s travel along the route.”

Sure enough, although we might not call them inn towns, several Jomon settlements were built along the road to the obsidian mine.
They are like oases in the desert. This is the sort of stuff I’ve come to expect of Jomon people.

Ms. Akiko Konda is a writer. Seeing the Kanonji Honma clay figurines in Kashihara-shi, Nara Prefecture prompted her to begin visiting archaeological sites and museums at various locations and start ongoing research on clay figurines. Ms. Konda has done extensive work on introducing cultural properties at various locations in easy-to-understand language. She has also been sharing the attractive features of cultural properties in a continuous manner through making television and radio appearances and participating in talk events and so on.