About the Jomon period and culture

Jomon is a period of Japanese prehistory that lasted over ten thousand years and corresponds with the European Stone Age. Today the Jomon has become a part of contemporary culture. While inherited from the distant past, the Jomon culture and landscape continues to be an inspiration to people in many ways, creating new culture and landscapes in Japan.

Jomon artifacts look quite different from today’s everyday objects. Indeed, they were created by the people who settled on the Japanese archipelago millennia ago. Among Jomon artifacts, pottery vessels and clay figurines are the most representative. Potsherds found from the Japanese archipelago are among the earliest pottery vessels across the globe. After the invention of pottery, the population who dwelled on the archipelago, the Jomon people, developed their techniques as pottery craftspeople and artists. In comparison to other prehistoric cultures, the Jomon created a great variety of pottery vessels. The pottery reflects the diversity of Jomon regional cultures and lifestyles in the Japanese archipelago, with its abundant natural environment. Some Jomon pottery vessels symbolize their world views, and others are made with extreme abstract expression. Jomon people applied their artistic technique to create clay figurines (dogu). Most are believed to be modeled on the shape of women and linked to prehistoric fertility rites. Both pottery vessels and clay figurines were embedded in the daily lives of Jomon people.

The Jomon period corresponds to the Stone Age. The stone tools of the Jomon people indicate their adaptations to the environment as well as their exchange and trade activities. Jomon stone toolbox contains hunting tools, such as arrowheads and spears, and food processing tools like stone mortars. Besides those tools, a large number of stone tools with sharp edges were used for creating other goods: such as fishing tools made of bones and antlers, wooden tools, and other handicrafts made of wood, bark, textile, bone, urushi lacquer, and leather handicrafts. Such organic artifacts are rarely found at archaeological sites, as the acid soil of the Japanese archipelago does not allow for preservation of organic materials. Stones were also reflective of prehistoric symbolic thoughts as well. Jomon people created various stone artifacts, such as stone rods and ornamental beads. Stone tools and handicrafts were made of diverse raw materials, notably obsidian, jade, and amber. These production sites are very limited, which stimulated the growth of broad exchange and trade networks amongst the Jomon people. Recent developments in the archaeological sciences has revealed long-distance transportations of these stone materials.

The settlement landscapes of the Jomon people were shaped by the production of these goods. They selected specific lands, worked on the earth, and made their living conditions and symbolic landscapes. We can glimpse into those traces and remains in the form of the location of sites, pit dwellings, pit clusters that might reflect pillar architectures, as well as stone monuments that indicate their symbolic world views. These settlements have been revealed by a large number the excavation projects throughout the region. Local enthusiasm, the dedication of heritage managers, and our archaeological imaginations have worked to make a variety of rebuilt heritage parks.

Jomon artifacts introduced above encompass essential elements of a way of life that continued for ten thousand years. They evoke not only our curiosity towards a remote, exotic, and lost world but also an affinity between Jomon period as a distant past and the current us, who are drifting between universality and particularity in traveling about the world. 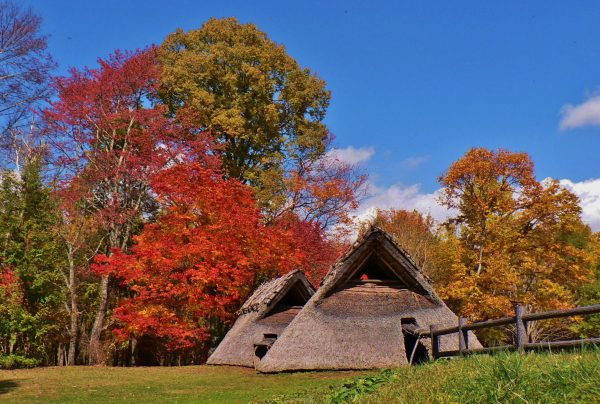 In archaeology, Jomon refers to the prehistoric culture that was located throughout the main islands of the Japanese archipelago from 14,000 to 400BC. The term “Jomon” itself, however, was born through international exchanges with the West. The American biologist Edward Morse (1838–1925) is considered the father of Jomon archaeology. Morse was one of many overseas specialists (oyatoi gaikokujin) brought to Japan in the Meiji era (1968–1912) to contribute to the modernization of Japan. He discovered Omori shell midden, located in Tokyo, while looking out a train during his commute to Tokyo Imperial University. With his students, he excavated the shell midden in 1877 and soon after published the results. Examining potsherds from the shell midden, he called them “cord marked” in reference to similar embossed patterns found on prehistoric pottery in the United States. The Japanese translation of cord marked is the term Jomon.

Jomon period artifacts such as pottery, clay figurines, stone tools, and lacquer wares have an enigmatic and aesthetic enchantment. The diverse assortment of Jomon artifacts have inspired researchers to come up with a variety of ideas about who these people were. One of the earliest was Tsuboi Shogoro (1863–1913), the founder of anthropology at the Tokyo Imperial University, who hypothesized that the Stone Age (Jomon) people in Japan were the Koropokkur (diminutive mythical characters from the folk stories of the indigenous Ainu people). Tsuboi and other early scholars worked upon the assumption that the Jomon were “foreign” to the contemporary Japanese population.

Subsequent research analyzed the Jomon in comparison to other archaeological and present-day cultures: some recent examples including Northwest Coast Native American tribes, Australian Aborigine, and the Ainu of Japan. They have come to describe the Jomon as “affluent” or “complex” hunter-gatherer-fishers in reference to the cultural diversity found in their artifact assemblages, settlement systems, and resource production patterns. Today no one would think the Jomon were characters from mythology and, for most, the Jomon are thought to be close genetic and cultural ancestors of the Japanese people.

Today you can look and experience the many Jomon artifacts, sites, and landscapes by traveling the Jomon of the Central Highlands of Japan, a designated Japan Heritage area. You also can freely imagine the culture of the Jomon people by engaging with the enigmatic and aesthetic Jomon artifacts, the diverse archaeological interpretations of them, and the rebuilt contemporary landscapes inspired by them.

The Jomon period culture is generally recognized as a hunter-gatherer-fisher society that did not engage in crop farming. Therefore, archaeologists identify the start of the Jomon Period with the emergence of pottery and its end with the introduction of rice paddy agriculture. Jomon pottery is valued for more than its aesthetic qualities, as typological analysis of the diverse shapes and patterns have provided a scientific view into changes over time and differences between regional cultures. Today, the Jomon Period is divided into six stages (Incipient, Initial, Early, Middle, Late, and Final) with the following dates:
Incipient Jomon: c. 14,000–10,000 BC
Initial Jomon: c. 10,000–5,000 BC
Early Jomon: c. 5,000–3,500 BC
Middle Jomon: c. 3,500–2,500 BC
Late Jomon: c. 2,500–1,700 BC
Final Jomon: c. 1,700–400 BC

The Jomon period was in the distant past. As a result, the artifacts made by the Jomon people have either perished or have been sleeping underground for millennia. These artifacts are awakened when they are unearthed by archaeological excavation. Sometimes the awakening of artifacts takes place well after their initial discovery: revealed by the light of scientific analysis or through the aesthetic appreciation by the public. From the moment of awakening, these artifacts that once belonged to the Jomon people become a part of the contemporary culture and landscape.

You can find museums and exhibition facilities in almost every municipality in Japan, regardless of size. The collections commonly combine unique archaeological discoveries alongside the distinctive character and history of the communities they are located. As you journey through the Jomon of the Central Highlands of Japan, you can visit a number of museums ranging grand prefectural institutions to local folklore collections. Jomon period artifacts play an important role at many of these museums.

Along with museum collections, archaeological excavations have led to the preservation and reconstruction of many Jomon sites throughout the country. Archaeological excavation happens for many reasons: academic research, community-engaged movements, and the construction of houses, roads, agricultural improvements, and railroad infrastructure. The loss of many sites during the postwar economic growth led into a strong grassroots movement to preserve archaeological sites. Such enthusiasm fostered into the well-composed rescue archaeology and post-excavation research system of Japan. The government sector conducts salvage archaeological research based on a “polluter-pay system” outlined in the Cultural Properties Preservation Act of 1950. Under the polluter-pay system, developers are required to cover the costs for salvage archaeological research. Most of archaeological exhibitions at municipal museums have benefited from this system.

Although the loss of archaeological sites is inevitable for any number of reasons, some archaeological sites gain a new life as historic parks when they are found to contain remarkable remains. The local enthusiasm for the findings at these sites provides the incentive to save them from destruction. During your travels around the Jomon of the Central Highlands of Japan, you can visit many historical parks that contain Jomon period remains. The Jomon site parks provide a vast public space, places for social education, and reconstructed buildings and environments of the Jomon period. These discoveries and newly built landscapes have inspired environmental philosophies, derived from the life of the Jomon people, that inspire many people today.